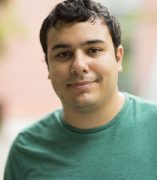 Marcus Michelen started at UIC in 2019 as a Research Assistant Professor in the department of Mathematics, Statistics and Computer Science before beginning his Bridge to the Faculty position in 2020. Prior to that, he earned his PhD in mathematics in 2019 from the University of Pennsylvania under the supervision of Robin Pemantle.

While a graduate student, Marcus worked with students for the Penn math department’s then-new Bridge-to-Ph.D. program, organizing and leading summer- and semester-long preliminary exam preparation courses. His commitment to teaching led him to receive two departmental teaching awards; the university-wide Penn Prize for Excellence in Teaching by a Graduate Student; and The Herbert S. Wilf Memorial Award for excellence in teaching and research.

Marcus earned a Bachelor of Science degree from The Cooper Union for the Advancement of Science and Art with a major in general engineering and a minor in mathematics. He became interested in math during his last couple years of college while interning as an actuary.

His research interests include probability theory, combinatorics and the analysis and geometry of polynomials.