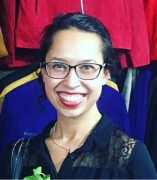 Danielle Beaujon received her PhD with distinction from New York University's joint program in History and French Studies in 2021. She previously earned a dual B.A. in Honors History and French & European Studies at Vanderbilt University in 2015. Danielle is a historian with broad research interests in policing, race, and power in a global context.